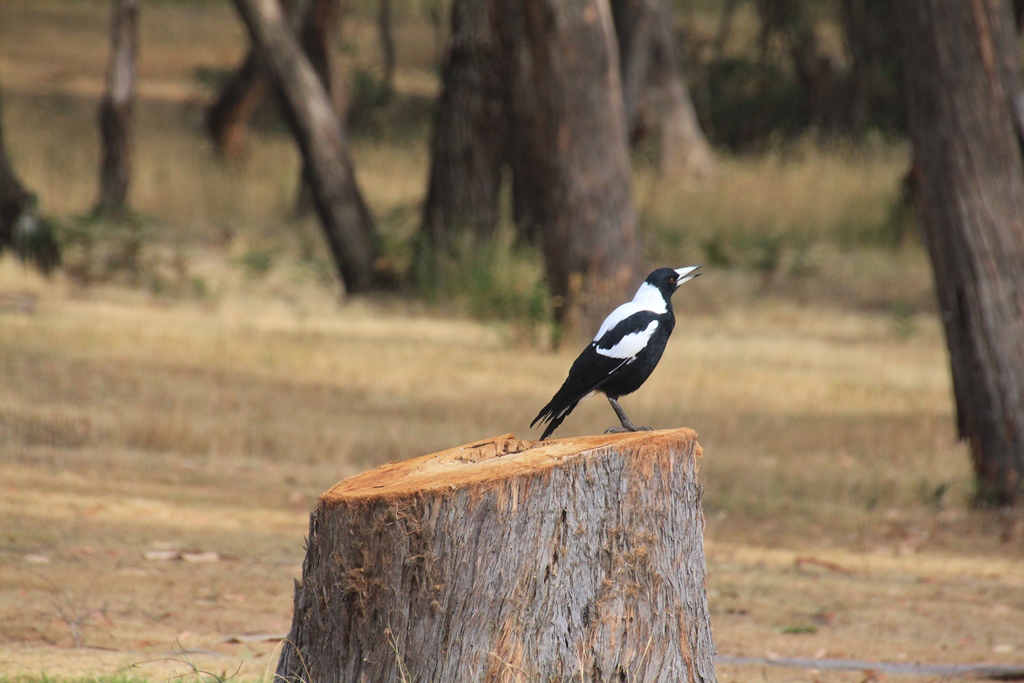 Magpies are so much a part of an Australian landscape, both in the city and in rural areas, that it is easy to look past them to more exotic species of birds. It would be very remiss of me to leave them out of my species list.

I have always loved magpies. Their carolling voices are scattered through my memories from childhood onwards, strutting around the back yard, sitting on fences and in trees, and surveying everything that happens in the neighbourhood.  My mother used to feed a magpie, which, after the breeding season, turned into six magpies.  They would sit on her clothes-line, right outside the kitchen window, and carol until she fed them.  If she was slow in producing the food, they would even tap on the glass.

The magpies here are very shy, making them more difficult to photograph.  They forage close to our home for most of the day, but if we walk out of the house, they will flee to the opposite side of the dam or into a high tree.  We choose not to feed them

In the city, our magpies had black backs.  Here, they have white backs.  I’ve learned, from Pizzey and Knight’s “Field Guide  to the Birds of Australia” that these are two difference races of magpie.  The black backed magpies are Tibicen, the white backed magpies are Hypoleuca, and a third race, Dorsalis, is found in the Western part of Australia.

Magpies are notorious for ‘dive-bombing’ people during the breeding season. They can actually do a bit of damage with their sharp, pointed beaks, as they tend to attack the back of the head.   Until we moved here, I had been lucky enough to escape this dive bombing.  In Spring of this year, our magpies seemed to single me out as a threat, dive-bombing me every time I went outside.  Even very close to the house.  It got to the stage where I had to put a hat on each time I stepped out the back door – even to go to the bungalow.  Once the breeding season ended, so did the dive-bombing.  Thank goodness!

Here are a few photos of the magpies which are a constant presence in our life.

This pair of magpies forage around the house for most of the day.

The magpies here are not used to people, and are much shyer than they are in the city.

The green grass which covers the outlet for the septic tank is a good spot for forraging.