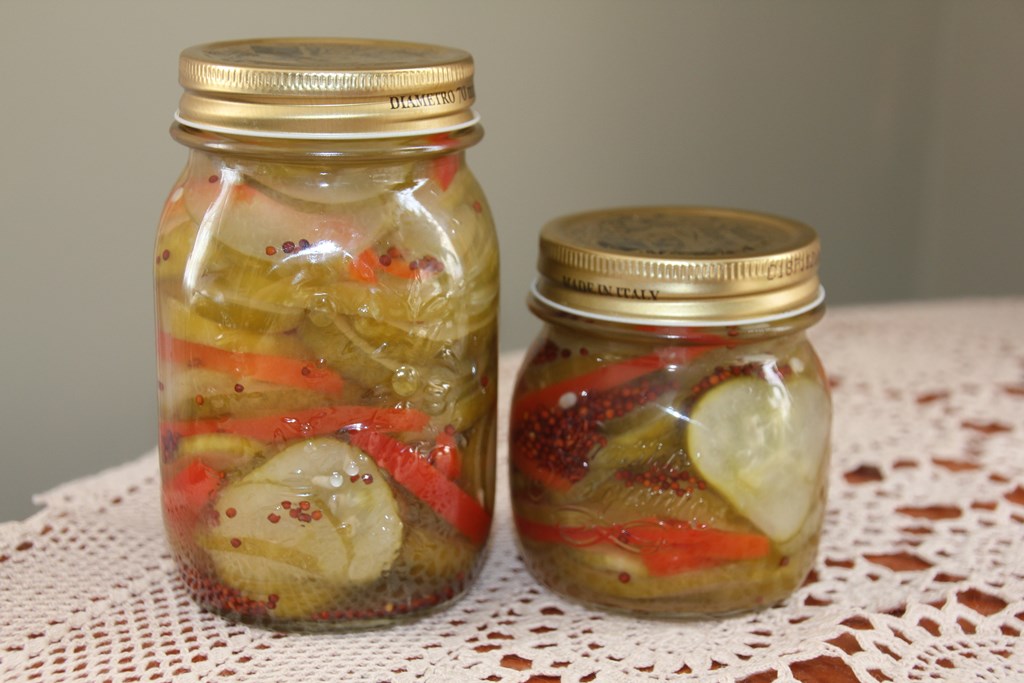 There hasn’t been any posts on self-sufficiency for ages, so I thought I would share my first attempt at pickling.  I’ve tried sauces, butters and jams before, but never pickling.

We had an excess of cucumbers, and the most common recipe in my cook books for using up cucumbers was ‘Bread and Butter Pickles”.  Apparently the name comes from the fact that the pickles are used in sandwiches. We have to let the pickles sit for a week or so before eating them, so I can’t report on the taste, but the process was easy.

I used 5 medium-sized cucumbers and sliced them thinly.  The cucumber slices have to be layered, with salt sprinkled between each layer, covered, and left to stand overnight.  The next day rinse and drain the cucumber slices and sterilise preserving jars and lids.

In a saucepan,  place two cups of vinegar. The recipe I referred to required white vinegar, but I had read other recipes which used cider vinegar – I ended up using cider vinegar.  Add half a cup of hot water, three tablespoons of sugar, two teaspoons of salt, and three teaspoons of mustard seed to the vinegar and bring it to the boil.  Simmer for five minutes then add the cucumber slices.  Bring the contents of the saucepan back to the boil, and then turn off the heat.

Slice up a red capsicum (thin slices) and place the cucumbers and capsicum slices into the jars.  When full, pour over the hot vinegar mixture, then seal and label the jars.

It took me less than half an hour to do this. If they taste good, I’ll certainly do it again.