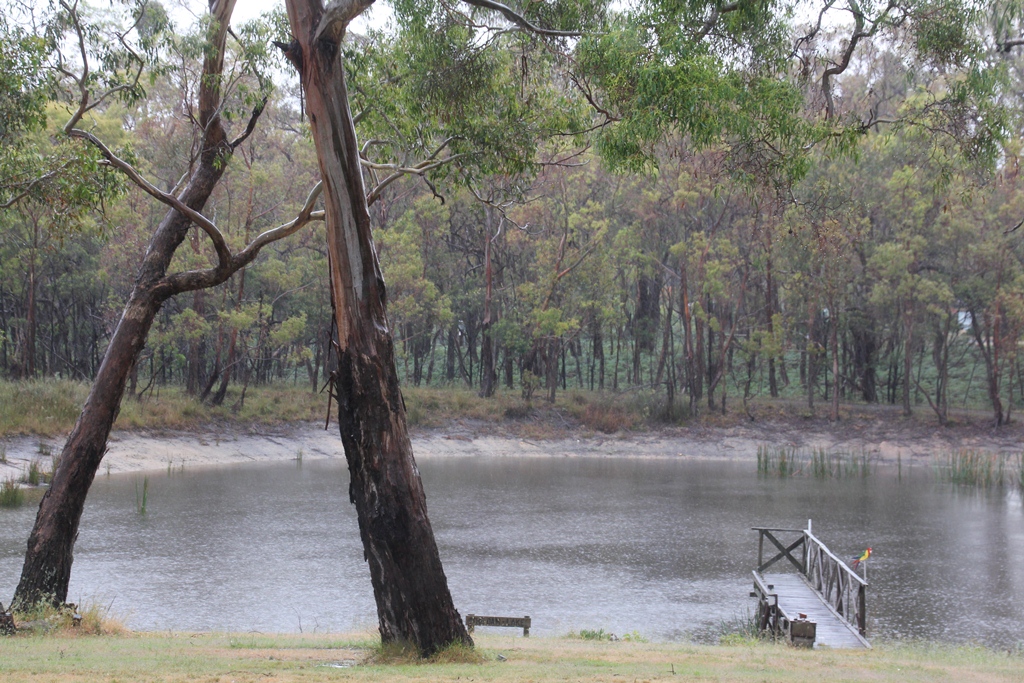 This week has seen a shift in the weather. As I walked around on Monday, the dry soil and drying grasses seemed so different from the lush green growth we have had here for most of our time. I didn’t see many native flowers in bloom, and the bracken had grown in areas which needed attention.  A water mark around the top of the dam, and the odd patch of green floating in the water, showed that it also needed refreshing.  Suddenly we also seem to be invaded by crows and cockatoos – two species which chase away smaller birds. It may still be November, but I knew Spring was well and truly over.

So it was a huge relief on Tuesday when it poured with rain.  Everyone was pleased to see it, except our cats. Luna was still so excited to go outside into the cat enclosure.  She complained bitterly about getting wet, and kept pleading with me to turn the rain off in the same way she demands a cuddle or food.  Even if I could have turned off the rain, Luna would have remained disappointed.  I hoped to see enough rain to replenish the dam. In the end, the rain stopped at lunch time.  It filled the dam a little, but it’s still well down on what I have come to think of as full.

The water level in the dam isn’t a dramatic event, but more a matter of aesthetics.  It’s a large dam and there is still plenty of water – we have been told it is 20 feet deep in the centre.   The house has town water plumbed in, and we have two water tanks collecting rainwater from the roof of the house and shed.  Still, I find looking at the beautiful dam so calming, and it does attract so many birds.  I anticipate that as the weather becomes hotter, we will see different species come to drink from our dam.  Any puddles in the bush will be dry soon, if they are not already.  Our sandy loam soil is great when it rains frequently, but it doesn’t retain moisture.  This prompts us to think of our next project – making sure we have all of the garden beds set up with a drip water system. Otherwise we will be spending quite a lot of time holding a hose.

According to the previous owners, the dam never went dry in the ten year drought, so even if the local Council imposes water restrictions, we will still be able to water our fruit and vegetables from the tanks or the dam.

After the rain, we attended a local Country Fire Association (CFA) information session about fire risk in our district, and planning for action in the event of a bushfire. We are permitted to cut down anything (trees or shrubs) within 10 metres of the house.  For the next 40 metres we can remove undergrowth and shrubs, but we can’t cut down any trees.  Removing the undergrowth means less fuel for any ground fire, such as a grass fire.  This can be the difference between the fire getting into the trees or not.  Grass fires rush through quickly, while tree fires can burn for days and set off spot fires all around.  The main message of the session was that we are solely responsible for our own safety. It is only a small community, and the fire trucks will be out fighting at the front of any fire that may erupt.  There won’t be anyone there to assist people on an individual basis.  While we knew the risks when we bought the property, this is chilling to hear.

Taking the message on board, Richard arrived home on Wednesday with a hired tractor and slasher. Until the CFA meeting, we had been mowing the 10 meters or so around the house (up to 30 metres in places) but keen to provide wildlife with habitat and also interested to see if new wildflowers would grow, we had let the grass grow long in other places.  Although it upset me greatly to know that along with bracken, some native plants would also go, I recognised if there was a fire in our area, we had LOTS of fuel on our property.  The bushland that gives us so much pleasure is also very vulnerable to fire.  We needed to find a balance between beauty and safety, habitat and low fuel. These are all hard decisions to make.

Richard spent 5 hours slashing undergrowth in areas that are outside our regular mowing zone. From the house the view is relatively unchanged, but there is substantially less bracken and long grass around the property.  While I’m sure we have more to do by removing the debris that has been cut,  we have started to reduce  the fuel load, while leaving patches of undergrowth with wildflowers as well as bracken.  I just hope the wildfowers in the mown places re-grow next year.  I’ve developed quite an interest in them since we’ve been here.

We registered for an on-site inspection by a CFA officer who will provide us with more specific informaiton about our property, including any other work we need to do in order to be prepared.  Hopefully this happens soon.

Thursday was hot.  In fact in Victoria  it was the highest November temperature for 100 years.  Around here it reached 35 degrees Celsius, but in some parts of the State it was as high as 45 degrees.  Grass fires were reported in areas we recognised.  They were nowhere near us, but it was enough to make me think of the practicalites which sometimes need to outweigh the aesthetics.

Today as I write this, the skies are overcast and a cool breeze blows through the open window. We had more rain overnight, and the grass outside my study window still shows more green than brown.  The weather burea predicts mid-twenty degree  temperature today, and rain with low twenties temperature for tomorrow.  I can see that my ‘weather eye’ is going to become fine-tuned over the Summer to come.  I can’t help hoping for a wet Summer, but all of the preductions indicate that it is going to be a hot one.