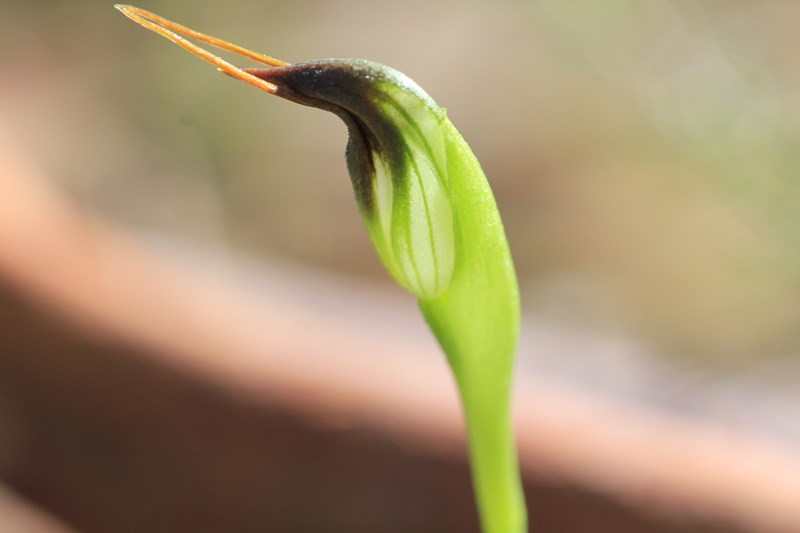 It felt like a Spring day today, even though it is still Winter in Australia.  The sun was shining, the air was still, and all around me I could hear the calls of a myriad bird species.  Knowing I could probably have taken some good bird photographs if I had changed lenses, I stuck to my guns and hunted for orchids using the Macro lens.  This diligence paid off – I found a solitary Maroonhood in a patch of Blunthoods, as well as Mayfly Orchid buds about to open,  Gnat Orchids, more Helmet Orchids, the first Climbing Sundew flowers of the season, at least two different types of Guinea Flower and a whole heap of Greenhoods.  All in all it was  a productive afternoon.

During the next week I will post photos of the other plants – today I am beginning with the Maroonhood (singular) because we have so few of them.  According to my David L Jones book, Maroonhoods are quite common and form dense colonies, but if they do, I haven’t found where they growing.    In total, I’ve found two plants in two years – this one plant today, and one (in a different location)  a year ago.

The Maroonhood in the photograph was growing right in the centre of the walking track.  It would be very easy to stand on it, and I guess it will be right in the path of wallabies and kangaroos (when they come back – they’re absent at the moment). Tomorrow I’ll attempt to fashion a protective shield so (hopefully) I can see the fully opened flower.