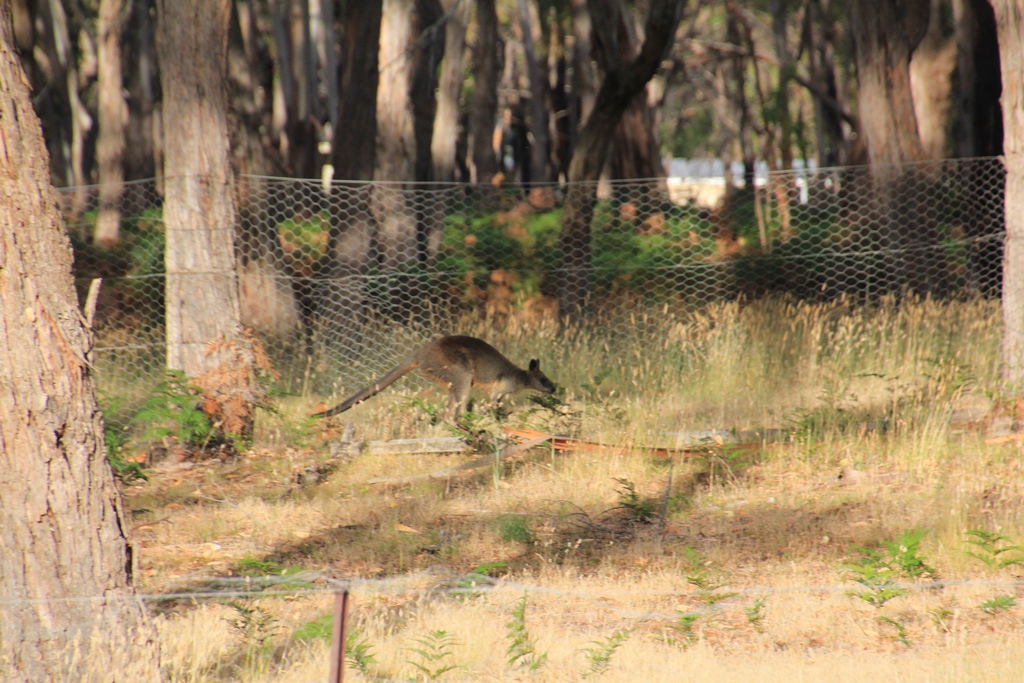 Our Christmas present this year is a photo of a  Swamp Wallaby!

We’ve sighted a #kangaroo or wallaby from a distance twice before, and have seen scratchings in the ground, so we knew they were around.  However, like many Australian mamals, kangaroos and wallabies are nocturnal creatures.  We owe this photo to an early clock-radio alarm call on Christmas Day in preparation for a family Christmas lunch happening at our place.  Maybe we need to be up and around earlier more often!

Unfortunately I was in the shower, and didn’t actually see the wallaby, but Richard was alert and spotted it trying to get out of a small fenced yard which will be our chicken enclosure in the very near future.  One of the side fences is low, and obviously how it got in, but the other three fences are higher, and in its stressed state, the wallaby was hopping up and down one of the high fences, trying to find a gap. Richard managed to stand in a position to cause the wallaby to change tack, and it jumped over the low fence and fled into the bushland.

Distinguishing characteristics for a Swamp Wallaby include dark coarse fur on the upper part of the body and either red or yellow brown fur on the under parts of the body, while the cheeks and shoulders have a stripe which can be either yellow brown, red brown or black.   They tend to be solitary creatures and have a home range of between 2 to 16 hectares.  During the day they rest in thick undergrowth, emerging at dusk to feed on grasses at the edge of the forest.  My reference guide for this information is “Cronin’s Key Guide: Australian Mamals‘ by Leonard Cronin.