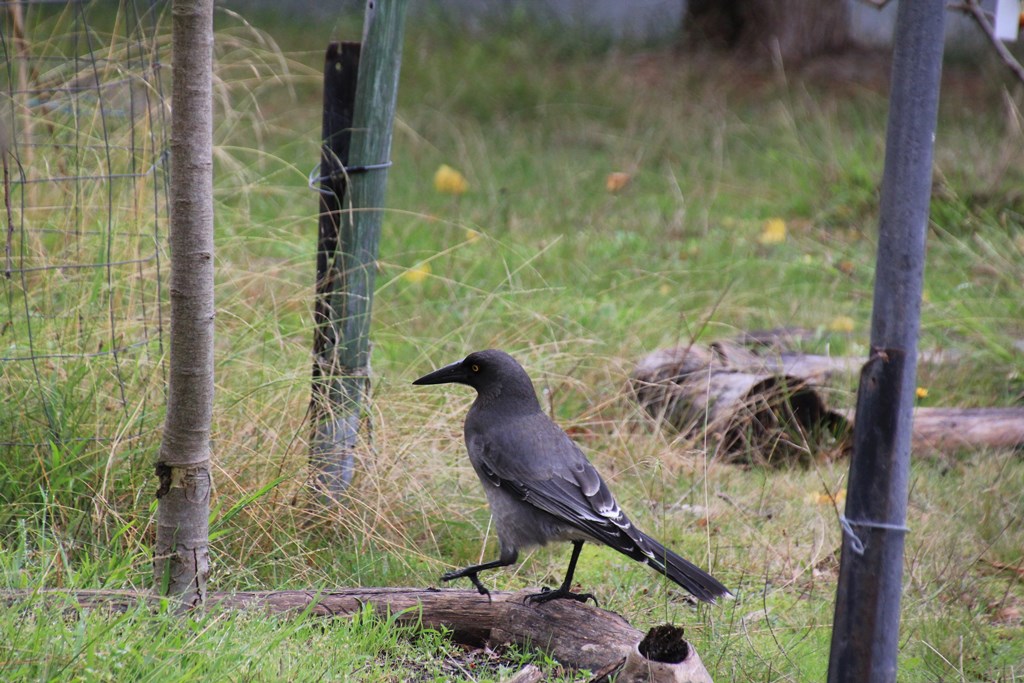 My attention was first drawn to the Grey Currawong when I saw cardboard strewn around our fruit trees.  We’d had some coffee grounds in boxes, waiting to be dug into the garden.  With the rain, my guess is the soggy cardboard held some tasty insects.  I photographed the Currawong throwing a piece of cardboard around to get at something beneath it.

A few days later, a Grey Currawong was on a tree-stump, just beside our deck, looking for food.

For some reason, I haven’t seen a lot of Currawongs of any description, so I found the Grey Currawong fascinating to watch.  It is such a striking bird to look at with the black, grey and white markings.  So streamlined and sleek, with a very determined look.  I don’t think I would like to get in between it and whatever it had its eye set on.  With that large sharp beak, and yellow eye, it’s certainly a formidable looking bird.

We only get a few plants each year, but the flowers of the Slender Mint (Mentha diemenica) flowers catch the eye through the browns and yellow-greens of summer. I never see this one in native plant nurseries. They seem to focus on River Mint.
It was a busy lead-up to Christmas, and every time I went outside I was delighted to see clouds of butterflies. So many this year. I haven’t had time to check, but this one is probably a Common Brown. We usually have plenty of these. They were all over the teatrees.
A Grey Shrike-thrush has nested in the wood shed, taking advantage of the bark on the floor from wood splitting. When the female flew off the nest for a few minutes, we climbed a ladder to peek in.
A few wildflowers from my walk up the back at lunchtime today.
These are just a handful of the photographs of pea-flowers growing in the bushland on our place in Spring. I’m still working out the species. At least a few Dilwynia.
In the grassland part@of our place, we have some Spiny-headed Mat-rush (Lomandra longifolia) growing,and they’re in flower right now. I notice they were shown on Gardening Australia on Friday night.
Loading Comments...
%d bloggers like this: