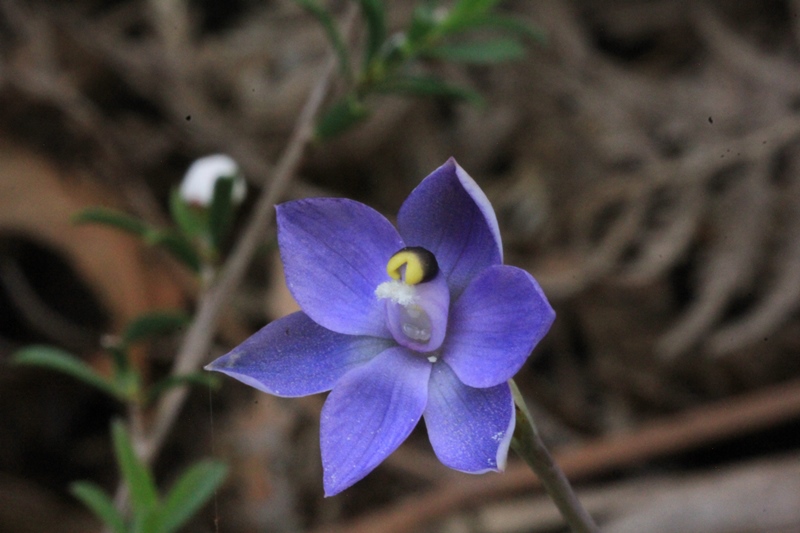 The centre of this Short Sun Orchid almost seems to have teeth shown in a gasp of horror!  It makes me smile because it is both beautiful and humorous in a charming way.  I like the way the colour in the lobes fades toward the centre of the flower.

I would like to tell you more about this species but it isn’t in my field guide, and The Atlas of Living Australia has no links to information, although it does show that this species is found in our area.  It also states that the conservation value is “poorly known”.  Identification was possible by looking at galleries of photographs of Sun Orchids through a Google search.  Not very scientific in some ways, but without this I would still have no clue about this species.

A very useful gallery of Sun Orchids has been put together by Retired Aussies  with species names and locations where they were photographed.  I think their photographs of the Short Sun Orchid match mine almost exactly.   I  think I will be referring to their site extensively in the days to come as I try to identify the other species of Sun Orchid I have photographed this week.

According to Retired Aussies, this species of Sun Orchid is endangered, so I am pleased to have a number of them growing on our property.  However, as Retired Aussies photographed their Short Sun Orchid in a different area, I am not sure if the ‘Endangered’ refers to that area, or to the whole of Victoria.  I will continue to research this species and post about it again if I find out more. It’s very intriguing.