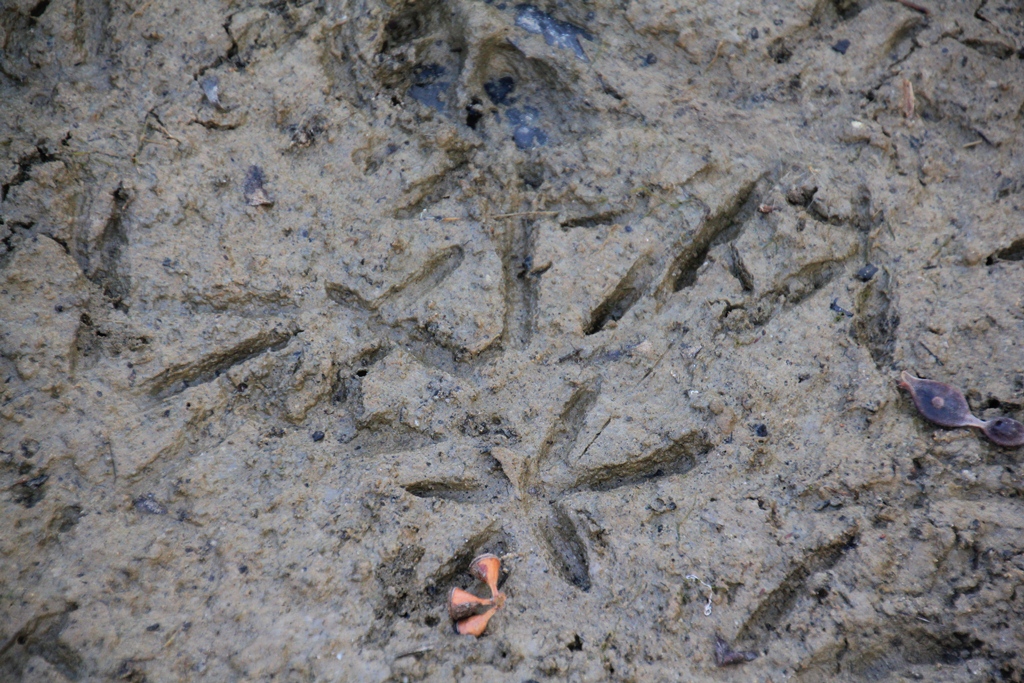 For the first time in weeks – it seems like a couple of months – it rained here. Well, we had good rain for a whole five minutes.  After that, only fine drizzle for a few minutes at a time over an hour or so.  The forecast predicts more rainfall over the next couple of days, so we have our fingers and toes crossed that we receive some of it.

We’re on town water, we have water tanks to collect rain when it does fall,  and a large dam, so we are not going to run out of water.  However, as I watch the water level of the dam fall, the grass dry out and some less hardy trees lose their leaves, I can’t help wishing for a huge downpour to refresh everything again.

The dam itself is diminishing on a daily basis from evaporation and seepage.  Currently we don’t water the garden with dam water.  We hand-water the front garden, the vegetable garden, the orchard, the fernery and the back yard from other water sources, and we have decided to let other plants fend for themselves.  Mostly this is native vegetation, which should be able to cope well enough under normal conditions.

Dropping water levels in the dam have created a small beach on the Eastern side.  As soon as the beach appeared, so did the Plovers.  When they are around they noisily chase away the ducks and any other bird which dare to land nearby.

Other secrets are revealed by the falling water levels.  We have found two sculptures  in among the reeds that the herons love to feed around – one of a horses head, the other of two fish swimming head to tail.    Also, the yellow Iris we thought were planted in the mud at the bottom of the dam are actually planted in a terracotta pot.  Many of the reeds are now out of the water, and it is interesting to see the density of stems emerging from the still-wet mud. Those higher up the bank look at bit dustier as they have been high and dry for a lot longer.

The dry conditions bring us new water birds, or larger flocks of water birds.  The White Faced Heron which was arriving solo, now has a mate.  Our family of Australian Wood Ducks have matured and we presume all 13 of them form part of the larger flocks which now arrive.  Yesterday there were 38 ducks for a short while.  The Black Kite, Australian White Ibis and the Royal Spoonbill were new to us, and probably seeking water after their regular pond dried up.  So taking all of this into account, I think we’re extremely lucky to have this large dam.  Even with dropping  levels, it is large enough to provide the wildlife with a reliable source of food and water, and large enough to hide those elusive long-necked turtles which I still haven’t seen.

Watch out for the South African weed orchids (Disa bracteata) which are starting to appear now. They spread so quickly and need to be pulled up, including the bulb, bagged, and put into the rubbish bin. We found 9 on Thursday. A friend, last year, had pulled out hundreds. They spread rapidly and need to be removed before they flower.
Common Flat-Pea (Platylobium obtusangulum) I love the leaves on this plant.
We had a bit of a surprise yesterday morning when Richard found this Long-necked Turtle midway between our dam and our neighbour’s dam. It was just pulling in its legs when Richard saw it, so by the time I got there it was well and truly hiding. We checked a little bit later and it was gone.
Just happened to be heading home when the rainstorm front was rolling in.
Aaaalmost warm enough for the Rabbit Ears Orchids (Thelymitra antennifera) but not quite. Unless it gets warm soon they will just self-pollinate without opening.
Next to the house was a lawn. In spring, these are only some of the things growing there. Still waiting for the Bulbine Lilies, Chocolate Lilies and more… Nature is so resilient.
Loading Comments...
%d bloggers like this: