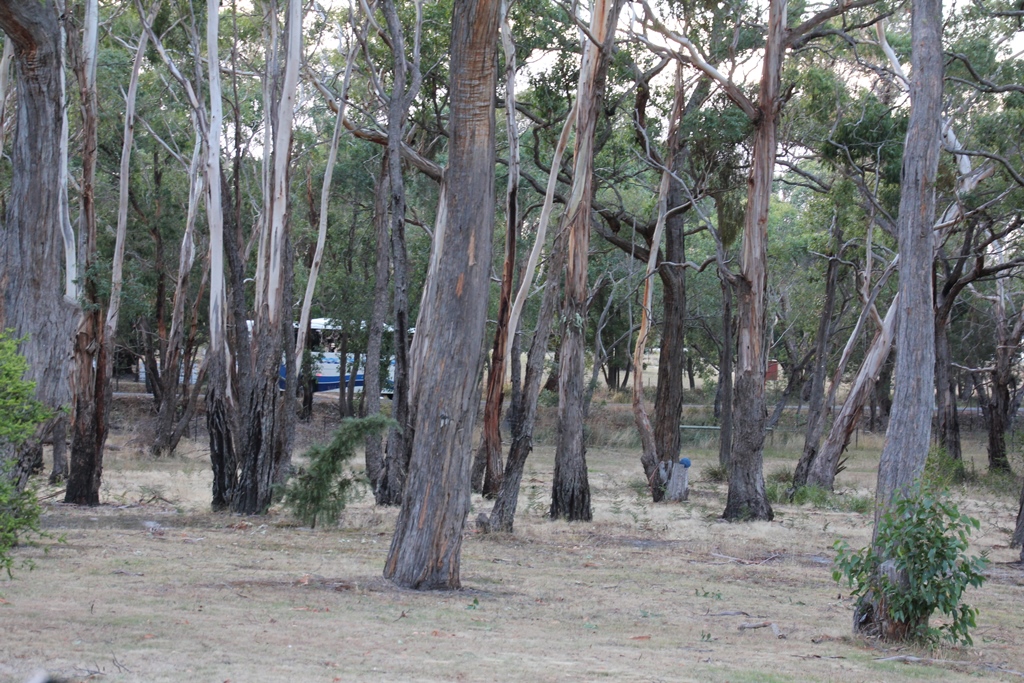 Intellectually, I’ve known that life-changing events can happen almost randomly.  This idea became a crushingly clear reality over the last two days after a large grass fire swept through our area, burning at least 16 houses and 18 out-buildings to the ground.  The fire took hold some 500 metres or so away, on land across the road from us.  On this day, a North Westerly wind blew the flames away from us.  If it had been a South Easterly it would have driven it toward us.  It brings home the realisation that regardless of how prepared we are, ultimately chance plays the largest role in how we will fare.

The morning of the fire was like any other Wednesday for me.  Three weeks into Autumn, we were still having hot Summer weather.  The temperature was predicted to reach 30 degrees celsius, and with high winds.  Just after 11am it was already warm and windy.  I went out to collect the mail and bring in the garbage bin and recycle bin, both of which had just been emptied.  Not long after I came back inside, I heard a siren.  This is not frequent, but occasionally I hear the fire-truck sirens as they move off into other areas to assist with fires.  So while I was instantly alert, it didn’t seem out of the ordinary.  Seconds later, I heard a second siren, and I knew something unusual was happening.

Out here, we have the Country Fire Association (CFA) Warnings and Incidents page constantly open on our computers and phones, which shows the latest information about fire location and severity.  It came as a shock to read that the fire was somewhere around here, but at that early stage, a precise location was not mentioned. Going outside, I looked for signs of fire.  Nothing.  No flames. No smoke. No smell of smoke. Nothing to indicate where the fire might be or how large it was.

I phoned Richard, who was at work in Ballarat, then began enacting our fire plan.  All Summer we have had a shelf in our wardrobe devoted to items we take with us if we need to evacuate. Suitcase with clothing, precious items, a fire blanket, heavy cotton and wool clothing which will not burn, a 2 litre cask of water, and other essentials to get us through a period of 48 hours away from home.  In addition the two cat baskets, cat food and litter, as well as the cats themselves were in the house ready to go, if necessary.  By the time Richard arrived home, everything was ready to pack into the car.  This is when it becomes important that I can’t drive a car.   If the wind had been blowing in our direction, I would have had to be gone before he arrived home.

Twenty minutes after I phoned Richard, he was home preparing the pump and bringing the fire hose up to the house.  The air was thick with helicopters, and the sounds of fire-truck sirens.  We now knew the location of the fire, and that it was heading away from us.   Actually, it was fortunate that Richard could get home so quickly as the road in front of our house was closed soon afterwards to allow emergency vehicles unimpeded access to the fire zone.  I’m not sure how I would have reacted if I were home alone as the day unfolded.

Having made sure we were safe, we monitored the weather conditions, the CFA website and listened to ABC 774 radio, which is the emergency broadcast station.  The warnings on the radio were word for word the same as the warnings on the CFA website.   They became highly confusing as the day wore on.  Our community was going to be impacted at 12 noon, then it was going to be impacted almost hourly throughout the afternoon and evening. It sounded like a second fire might be heading towards us, but we worked out that two overlapping warnings were talking about the same fire, not two different fires.  By early afternoon we could see some smoke in the distance, but we still couldn’t smell it.  Remaining vigilant we continued to monitor the conditions and stay on alert for some twelve hours, until the fire was brought under control at around 11:15pm.

Overnight and all of the next day, CFA fire-fighters continued to battle the flames.  They will probably be here all of this week to prevent it flaring up again.  These men and women are volunteers and they do a fantastic job.  It was due to the knowledge we gained from the CFA meetings we attended in November last year that we knew what to do.  At a community meeting yesterday morning, the CFA were praised by all sectors of Government and the police for being so highly organised and able to fight the fire so quickly, and so well.  The heat and the high winds could have intensified the fire much more strongly if they had not reached it so quickly.  We’re all so grateful for their efforts.

For me, the impact of the fire was really brought home when we attended that community meeting.  Listening to people who were prevented from returning to their property for safety reasons – they wondered if their house was still standing or not, how their animals and livestock had fared, how long it would be before they could go back, who was going to tell them when they could return, what was going to happen in the meantime?  While all of the Government services were empathetic and there to help, so early on into the recovery, no-one had any answers for them.  It was heartbreaking.

Looking from our house toward the road, the view looks the same as it has since we moved in.  It is hard to comprehend that the fire ground lies just beyond the land we can see.  The road has re-opened, and life seems to continue as it did before, but on a fundamental level everything has changed.

The CFA have published photographs of the fire.  You can see their photos here.