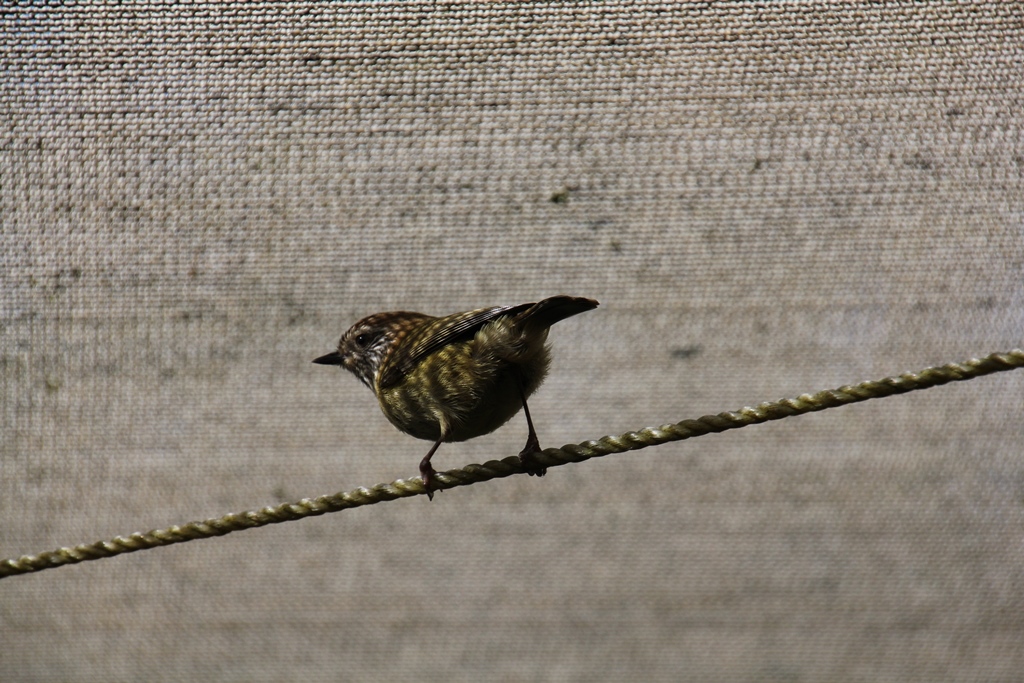 If it had not been for the persistent, urgent chirping, I would not have noticed the Striated Thornbill in our fernery today.  It seemed to be giving an alarm call, as if I were intruding into its territory. The longer I watched it, the more exaggerated the flitting from one place to another appeared to be.  Assessing that it was going to stick around, I went inside and came out with the camera. Sure enough, it was still there, and still “defending” its territory.

When I walk around the boundary of the property each day, I hear this call from many trees, so I suspect we have quite a few of this species in our bushland too.

My field guide tells me that the Striated Thornbill breeds between July and December, hanging a woven nest in amongst bushes. We have a few sizable bushes in the fernery, so perhaps if I look hard, I might find one.  I didn’t look for a nest today.  Firstly, because i was focussed on photographing the bird, and secondly because our two cats appeared toward the end of the photo shoot.  I didn’t want them to notice the bird, so I led them back inside.

I’ve posted quite a few photos below to show you as clearly as I can the colours and markings of the bird.  It was a sunny day today, and the shadow of the canvas weave is falling on the Striated Thornbill in most shots.

A lovely little patch of Gnat Orchids
Slatey Helmet Orchids are starting to flower.
I thought I would start introducing the creatures that live on our property. The obvious one to start with is Cheeky, the wild Sulphur Crested Cockatoo who introduced himself to us not long after we moved in. Most of the Cockatoos stick to the trees, but Cheeky literally knocks on the door, does a routine with wings and crest extended to get attention. If we still don’t talk to him, he shouts. Yes, we give him some sunflower seeds, but it isn’t all about the food. He often sits and listens to me talk rather than eating, and when I was really ill, I sat and told him all of my thoughts. He is a wonderful listener. He also checks out what I have on my feet every day. I have no idea why.
Nature never ceases to surprise me. In reality, the orange fungus (or is it slime mould?) was even brighter than my photos show. Next night it rained, there was a frosty morning, and now no sign of it.
Dusk tonight from the far side of the dam looking toward the house. I like the reflection of the house light on the water. Also the silhouettes of trees against the clear sky.
Slaty Helmet Orchids (Corybas incurvus) are coming into bud. Such interesting little plants. Another one which is there every year.
Loading Comments...
%d bloggers like this: