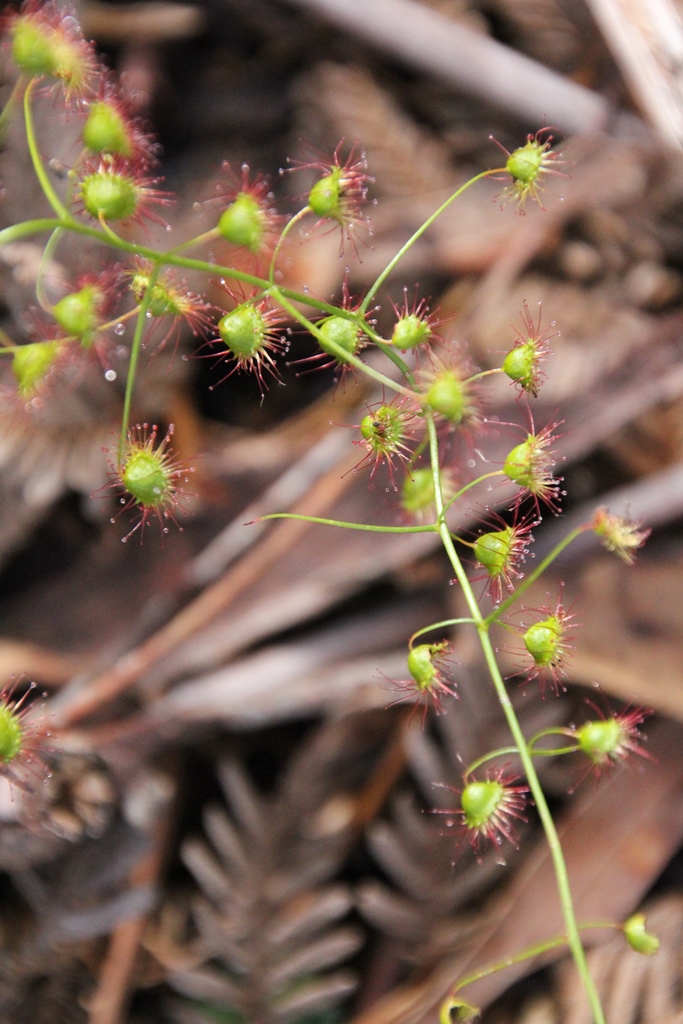 On Saturday, I posted two photos of the Scented Sundew an insectivorous plant.  I took these photos late in the afternoon, when the light was not good. They were quick photos, for identification of the flower. Heading back out on Sunday, in better light and with the aim of taking better photos, I discovered they were gone.  Nearby, a pile of kangaroo poo.  So I guess the question is answered – do they eat the wild flowers? Most definitely they do.  I can’t even see the leaves or the unopened buds of the plants, It looks like the ‘roos ate everything.

This triggered a Scented Sundew hunt on the remaining parts of the property – surely they would be elsewhere?  It turns out we have a few more patches, but they are not in flower right now. However, when walking around, looking closely at the ground for tiny leaves, I found another Sundew – the Climbing Sundew Drosera macrantha Endl.   Both plants are considered to be carnivorous and insectivorous.

At first glance the Climbing Sundew looks like it might be a weed, but on closer inspection, the tiny red sticky hairs are clearly visible on pad-like leaves which occur at regular intervals along the stem.  Our Climbing Sundews are not in flower, but the guides I have consulted tell me that this plant does flower from late winter, through to early summer.  The images of the flowers they show resemble the Scented Sundew flowers – five petals, white with yellow-tipped stamens.  Apparently the flowers can also be pink, but all of those shown were white.

Remarkably little information on the Climbing Sundew was recorded, so while it is not considered to be a threatened species, I can’t tell you much more about it.