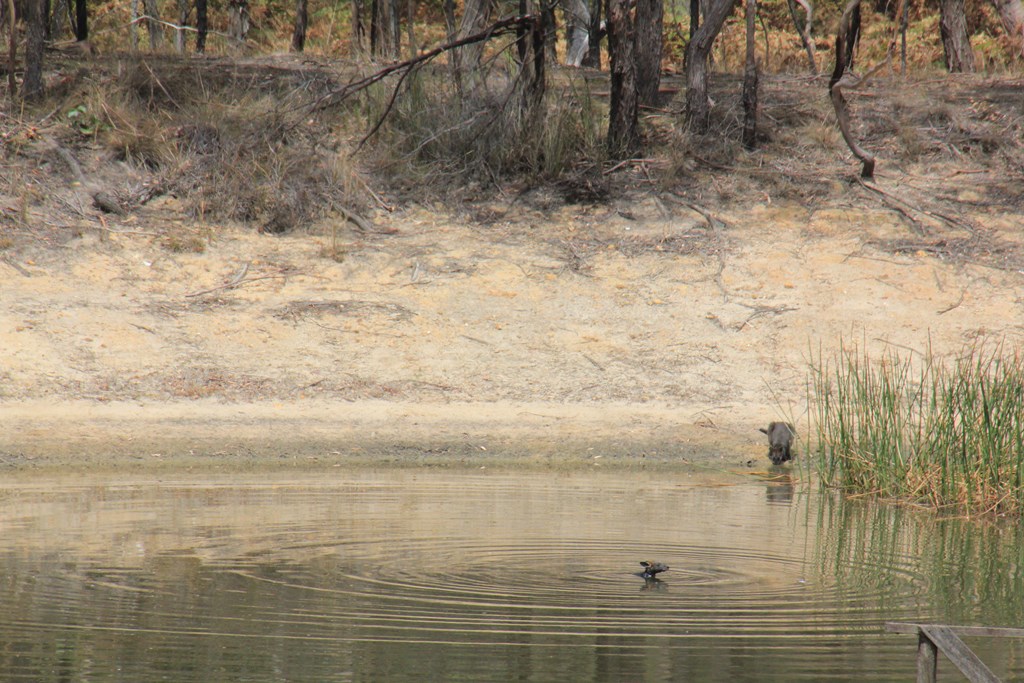 On hot Summer days, it gave me great pleasure to see the Swamp Wallabies cooling off in the dam.  They would move slowly through the water, parallel to the shore in the shallows. As they moved their hind legs, the rounded shape of their knees rising and lowering at surface level suggested the motion of a paddle steamer, with those ‘big wheels’ turning.

When I began photographing the Swamp Wallaby in the water on a hot day, early in February, I imagined it would be more of the same. A Swamp Wallaby cooling off by trundling along the shore in the shallows.

Surprisingly, this time the Swamp Wallaby headed out toward the centre of the dam, which is quite deep.  In my ignorance, I thought Wallabies must be able to swim, so I continued to photograph as the Wallaby moved further and further into deep water.   I remember being quite impressed that Wallabies, with their bottom-heavy shape, could swim so well.

All of these photographs were taken from inside the house looking toward the dam.  The closest shore is approximately 30 meters from the house.  The next photograph, showing signs of a struggle, was my first clue that something was horribly wrong.

At this point I abandoned the camera and flew down to the dam as fast as I could.  By the time I got there, the Wallaby had disappeared under the surface of the water.  The dam is quite large and I’m not a strong swimmer.  The murky colour of the water meant I also could not see where the Swamp Wallaby actually had submerged.   Feeling utterly helpless, I kept moving around the shore of the dam, hoping to find a spot where I could do something to help.  I almost bumped into the other Swamp Wallaby as both of us were fixated on the spot where we thought the swimming Wallaby may be.  Startled by my presence, the second Swamp Wallaby stood to full height, and then fled into the bush.  It looked so small. I thought it was a joey.

Realising there wasn’t much I could do for the drowned Wallaby, I turned my attention to the joey. BADGER is a local wildlife assistance service, so I called them.  The woman I spoke to asked me to describe the height of the joey, and in the discussion that ensued, she reassured me that it was probably large enough to fend for itself.  Given its size and familiarity with the environment, she explained it would be almost impossible to find it,  and even if we did, it was too developed to be cared for in the way tiny rescued joeys are.

So that was that.

It has taken me a few months to write about this event because I still find it upsetting. I will never forget the expression on the face of the joey as it stared into the water, oblivious to everything but the question ‘Where did she go?”  I don’t think I am guilty of anthropomorphism by writing that.  Having watched its mother swimming, then disappearing, it was obviously waiting for her to surface, to come back to shore so they could do whatever it is they normally did.

The following day, the body of the drowned Swamp Wallaby surfaced.  We used a fishing pole to reach it and drag her body to shore.  I assume the Wallaby was a female because of the joey, but we didn’t actually check.   We then buried her high up on the bank of the dam, and this is the site for our new native plant garden ‘Wallaby Grove”.  I’ll write more about the new garden soon.

8 thoughts on “A Tragic Summer Drowning”