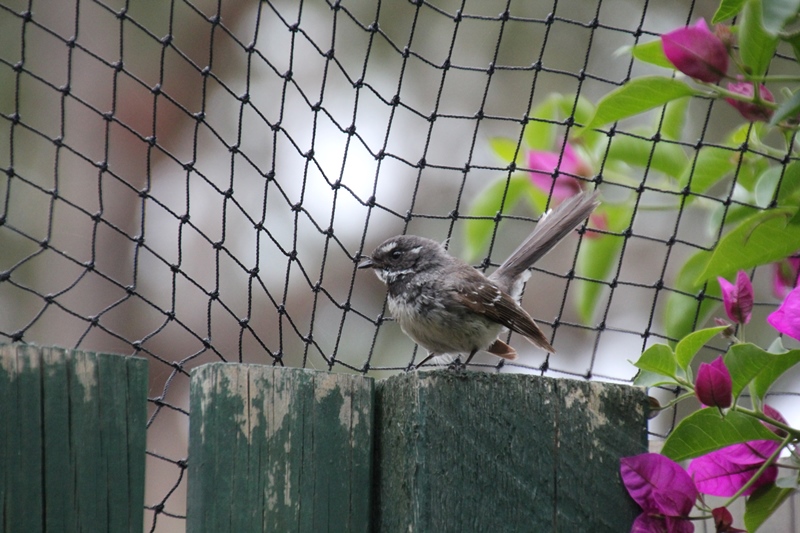 Once again a wild bird found its way into the fernery through some trellis – this time it was a Grey Fantail.  You may remember the Grey Fantail nest I found early in November. At the time I wasn’t able to get clear photographs of the bird.    The nest was quite a long way away from the house, so I’m sure this is a different bird than the one I originally photographed.

Unlike some of the other birds which have found their way into the cat enclosure via the fernery, this one was very difficult to catch.  I kept ‘herding’ it back toward the trellis, unsuccessfully, tried netting it with a large fish net, unsuccessfully, and in the end I lifted up the cat netting over the above gate, hoping it would find its own way out.  I think it eventually did do that as the cats were inside and I didn’t see it the next time I went outside.  Phew!

A side note about the fish net:  I have used this once or twice before when birds have been too frightened to move, and sit where I can gently place the loop around their resting place, allowing me to gently hold the bird and take them outside the yard to release them.  This Grey Fantail simply didn’t sit still long enough for me to do that, and I was afraid of stressing it too much by chasing it around.   The bird did keep gravitating toward this gate, so my hope is that it flew out the gap in the netting  I created.

Here are a couple more photos: