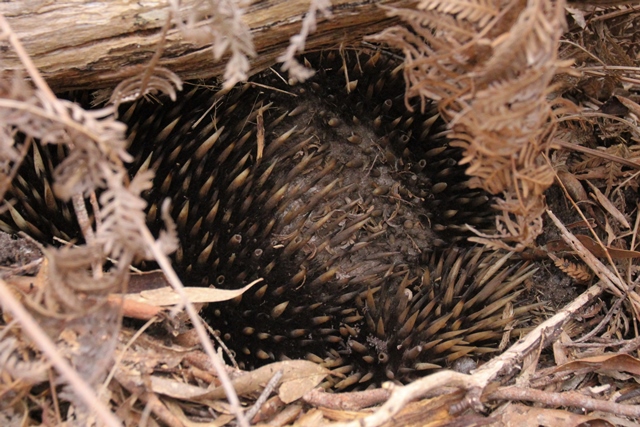 Last year I photographed this Echidna hiding under a log. It was dug firmly into the ground and I had no intentions of disturbing it.  As you can see, the spines on its back are badly damaged, as is the fur.  We have had bushfires in our area, so perhaps it survived a fire, or perhaps it was run over by something. I knew it was OK because I had seen it walking around and foraging on a few other occasions.

A week or so ago I heard rustling in the undergrowth which sounded like an Echidna, so I followed the noise.   It was an Echidna – in fact the very same one.  Unfortunately I didn’t have the  camera with me.

At the first sight of a human, Echidna’s tend to hide. This one was no exception. By the time I reached it, a substantial hole had been dug to hide in. Alongside the Echidna, also dug in, was a smaller Echidna, fully-spined – approximately half the size. Given the time of year, perhaps it was a male and a female, as male Echidnas are larger than females.  The hole may also have been a mating trench as it was quite large.

Happily, I can report the spines are growing back and  the fur has also regrown.   It is still possible to see the round, flat scar though, with the new spines only half the length of the established ones.