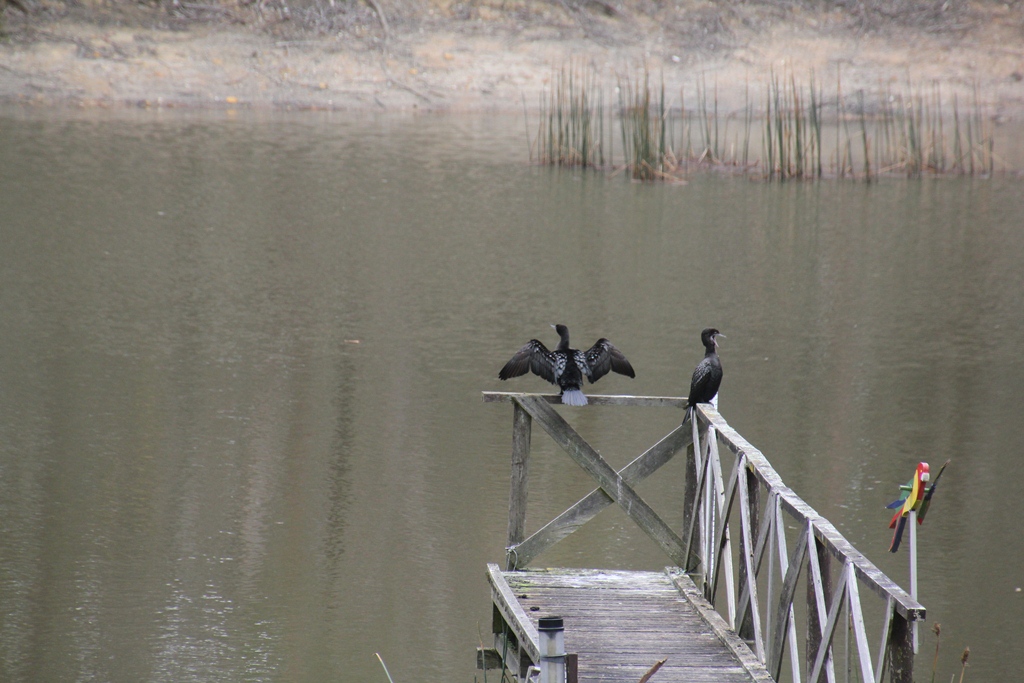 Featuring the Little Black Cormorant, this post is the first of a series of photos from my archive.  We’ve been here for two and a half years now.  As I look back through the photographs I’ve taken for the blog, I notice that some of them never made it into a post.  Often this was because everything was new and fascinating and there was an abundance of interesting things to write about.

The Archive Photos series will feature some new species for the A – Z List,  changes in the environment over the time we’ve been here and generally look back at some highlights.

I took this photograph ten days after we moved into the house, in 2012.  Late in August, after good Winter rainfall, the dam was full and the landscape was a lush green. The wind-operated parrot on the jetty handrail was still in one piece here – this is before the cockatoos destroyed it.  I also notice the patch of reeds at the back of the dam is quite sparse in this photograph.  Over time, it has thickened up quite a bit, although currently, the water level has dropped to the point where it just barely reaches these reeds.

Until now, the Little Black Cormorant was not listed in the Bird A-Z Species List, so I’m happy to add it in. This is the third species of Cormorant we’ve had fishing in the dam.  Previous posts have featured the Great Cormorant and the Little Pied Cormorant.

I don’t think we have had many visits from Little Black Cormorants, and this is possibly because the species only venture inland when the conditions are suitable.  Given the lack of rainfall, there is probably little to entice them inland this year.  However, they can be found on coastal land all around Australia.

The Pizzey and Knight Field Guide to the Birds of Australia describe the species as being entirely black, with dark grey slender bill and black facial skin.  Their head and neck can be sparsely flecked with white, but they don’t have any white patches at all. Breeding plumage can add a bronze sheen.   The birds can grow between 58cm and 64cm in length and have a wing span up to 1 metre.

Apparently, often Little Black Cormorants fish in flocks, so I can see why our dam may not be large enough, nor have sufficient fish in it to serve as a frequent habitat for this species.