In an earlier post, I worried about disturbing the Superb Fairy Wren’s habitat in our back yard. I also worried about our cats killing the wrens if they were able to find a way into the newly constructed cat enclosure.  Most of all, I lamented that I would no longer see their cheery form hopping around the lawn, or landing on my kitchen window sill.  All of these fears have proved to be unfounded.

Immediately after the cat enclosure was constructed, the wrens were cautious.  They flew around the outside of the enclosure, and occasionally ventured into the fernery – entering through the lattice which forms one wall.  Gradually, they worked out how to exist in the new environment, and were soon entering and leaving at will.  Now they seem to have sorted out the habits of our cats – usually the cats sleep until about 10am.  This week I was delighted to see the wrens revelling in their old feeding grounds. When I looked out my kitchen window this morning, I was greeted by the scolding call of the male Superb Fairy Wren, warning his mate that I was up and about.

The wrens continued feeding in the cat enclosure all morning, even when the cats were up and outside.

I ventured out with a camera, not really expecting the wrens to hang around, but hoping they would.  They did.  It turns out that the bushy bougainvillea and rose bushes planted alongside the bunglalow  harbour a lot of insects which the wrens find tasty.  I watched them enter through the lattice, land on the weeping cherry in the middle of the yard, fly into and out of the bougainvillea – then back to the weeping cherry, and out through the lattice.  I’m not sure if this pair has a nest in the remnants of the Banksia Rose that covers the outside wall of the fernery, but they were certainly focussed on food gathering. In the photos below, you can see the male with a moth he had caught.

While I was taking these photos, I had both cats at my feet.  They watched the wrens, but did not attempt to run after them.  I’m sure they would kill them if they had the chance, so I suspect that the cats have worked out the wrens are too hard to catch – that it is much easier to hunt lizzards.  So maybe cats and Superb Fairy Wrens can co-exist after all.

I hope you enjoy these photos. I delighted in taking them.  If you receive this post by email, you can view the photos full size by clicking to come to the blog, and then clicking on a photo to scroll through the gallery.

The dense foliage of the roses and bougainvillea inour backyard cat enclosure create a perfect micro environment for the Superb Fairy Wrens.

The wren’s enter the cat enclosure through this lattice which forms part of the side wall of the fernery.

The female is often seen sitting and watching the male as he hunts for food.

The female Superb Fairy Wren does not have any blue feathers, but does have red-brown markings around her eyes.

The male wren leaps off the weeping cherry branch to grab a moth. 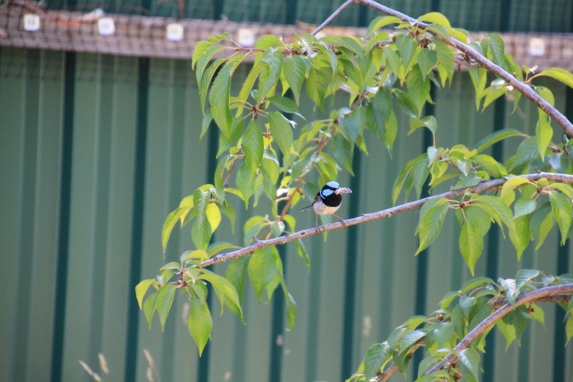 The male Superb Fairy Wren shows off his catch.

4 thoughts on “The Fairy Wrens and the Cat Enclosure: A happy story”