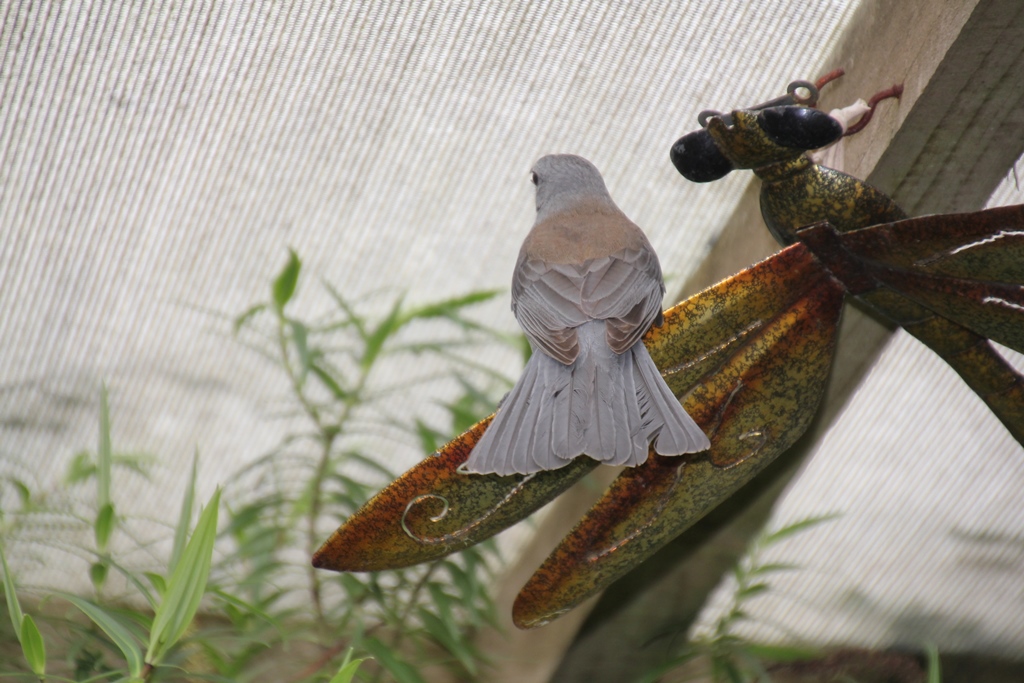 I’m amazed at how many new bird species we find inside the cat enclosure, which was designed to keep the cats in and the birds out.  Hmmm, it is obviously not working as well as it should.

Yesterday, a pleasant lunch was interrupted by loud bird calls, and excited cat noises.  I went outside to find a very frightened bird trying to find a way out.  It kept on bumping into the netting, then flying into the fernery, then back down to the house.  All of the time, the two cats were madly running beneath it, just waiting for it to falter.  Often I can net a bird when it stops to catch its breath.  They often choose to rest by clinging to the cat netting, making it easy to slip a looped net over them.  However, this one was too smart. It kept choosing places I could not reach.

After two separate half hours of failed bird netting, I recognised my efforts were futile, so I took a few photographs for identification purposes, and went back inside. After another  hour or so, the cats came inside too.  There were no feathers, no excited “I caught something!” miaows, so I think the bird did eventually find its way out through the trellis, where it must have entered the enclosure.

While I thought it was such a beautifully elegant bird, I hope it has learned the cat enclosure is a place to avoid.

Taking the photographs was a smart move.  Without them, I don’t think we would have worked out this was a female Grey Shrike-Thrush.  In my field guide, a few birds roughly match the description, but with a photograph I was able to see the faint, pale ring around her eye,  and the subtle grey, rufous and  black markings on the feathers, and the length of the wings and tail.  The pale beak and eye ring mark her as a female. Male Grey Shrike-Thrush birds don’t have the eye-ring, have more olive colour on their back and also have a black beak.

According to my Field Guide, the Grey Shrike-Thrush nests between July and February, and they build large nests of bark strips in the forks of trees or around houses.  Apparently these birds can be quite tame if they become used to human interaction.

I was very impressed with the detailed observation my Mother made simply by watching the bird fly up and down the cat enclosure.  She isn’t used to identifying birds, but was able to correct me on three or four details – such as length of the wings and tail, and the shape of its beak.  When I went back to consult the photograph, I discovered she was right on every count. I think she’s a natural!