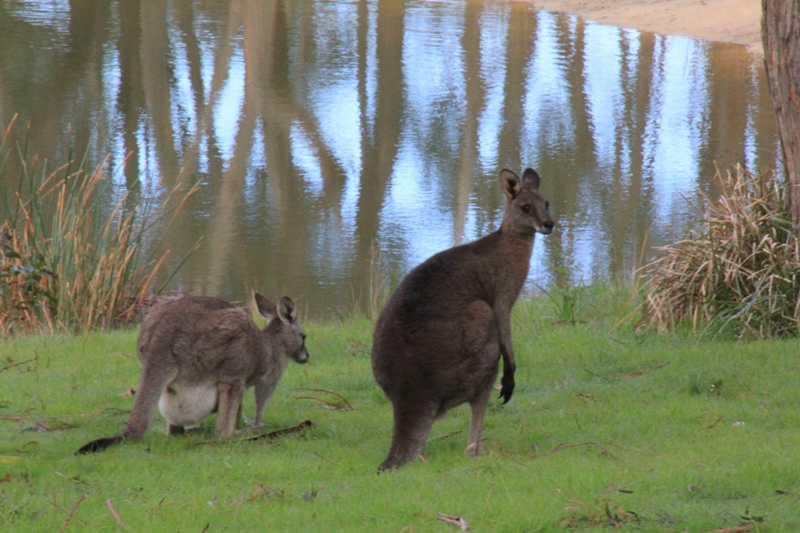 I’m not sure what is happening in the Kangaroo world, but we’ve had quite a bit of change lately, with a new mob showing up on occasion.  For more than a year, we have had a fairly stable population of Eastern Grey Kangaroos, with rarely more than three here at a time.  Mostly, this has consisted of a mature female with last year’s joey at foot, and another in the pouch. A male kangaroo would drop by occasionally, and sometimes there was an additional female – but very rarely.

Recently I wrote about the return of our regular mob, which we think of as ‘our kangaroos’. We’ve watched ‘Junior’ grow from a tiny bump in the pouch to a boisterous teenager, racing around the dam, to an age where he must be ready to leave his mother’s side very soon.  We were looking forward to the new joey emerging from the pouch, and have seen it hopping around on occasion.  However, two days after I wrote the last post, a new mob of kangaroos arrived, and this seemed to cause our usual mob to move away.

There have been periods of up to a week where no kangaroos were here at all, others when a lone young male wandered through, and now the new mob are back.  This mob consists of a large, very dark, male kangaroo, a mature female with joey in her pouch (younger than the joey we were watching) and two small,  immature young kangaroos – probably last year’s offspring.  I think one of these is a male, but I don’t think it is ‘Junior’ – again, he seems a bit smaller.  I haven’t been able to identify the sex of the second young kangaroo, but it may be a female.

Surprisingly, I feel territorial on behalf of our usual ‘mob’,  including feeling a bit indignant that they have ‘chased’ our kangaroos away.  I can’t help worrying about ‘Junior’ and the young joey, hoping they aren’t forced to cross busy roads or have encounters with dogs or hunters.  When they are on our land, I know they are safe.

In the end, I have no control over these matters.  If the new mob decide to stay here, I know I will still enjoy watching them, but it will take me a while to accept them.   Hopefully ‘our mob’ will return at some point.  I’d just like to know how they are faring in the big wide world.

8 thoughts on “A New Mob: Ructions in the Ranks”